In September 2009, at a gathering, discussions arose on deciding the name of the Corvette Club. During which time, everyone would always compliment us as they'd see us cruising in our cars saying, “living the dream” or “the dream”… And therefore, “Living The Dream” was born.

During the winter of 2009, Brian laid the framework for the club constitution, by-laws, club application, dues structure and the club logo. With some preliminaries either done or under way continuing discussion, Living the Dream of Harrisburg, PA, was essentially formed and on its way. It was agreed that as an organization, not only are we interested in banding together for the purpose of gaining information, exchanging ideas, and for the mutual enjoyment of the Corvette sports car, but also involving itself in community projects and charitable organizations.

The first meeting was held in May 2010 at Moe’s Barbeque, Coatesville, Chester County, PA. The following officers were elected at that meeting: Brian Westmoreland, President; Teddy Robinson Vice President; Don Way, Treasurer; Mark Baxley, Secretary; Larry Kelly, Chaplain, and John Brown, Sergeant- At- Arms. We had a total of 13 members to start the club.

On September 9, 2010, Brian Westmoreland and Teddy Robinson designed and presented the 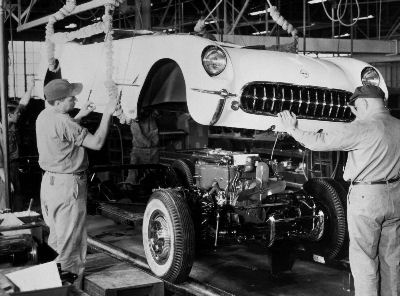 Living the Dream Corvette Logo and mission statement. The Club unanimously voted and accepted the logo and mission statement. The club started with 13 members and continues to grow with members from Delaware, New Jersey and Philadelphia areas. Our Club consists of members all ages, interests and backgrounds. The club offers activities for those interested in car shows, touring, and/or other events. The Club meets once each month to plan and participate in events throughout the year.

The LTD Corvette Club has engaged in charitable activities during this time. Since 2011, we've held an annual BMX bike give away, with members driving their Corvettes in a caravan to deliver the bikes to boys and girls across the Commonwealth. LTD has donated approximately 75 bikes to children facing adversity. We currently support the Ronald McDonald House by participating in their events and making an annual donation as well as donating to the Alex McIntosh Leukemia Fund.