Entering the 1950s, no corporation even came close to General Motors in its size, the scope of its enterprise or its profits. GM was twice as big as the second biggest company in the world, Standard Oil of New Jersey (forefather of today's Exxon/Mobil), and had a vast conglomeration of businesses ranging from home appliances to providing insurance and building Buicks, Cadillacs, Chevrolets, GMCs, Oldsmobiles, Pontiacs and locomotives. It was so big that it made more than half the cars sold in the United States and the U.S. Department of Justice's antitrust division was threatening to break it up. In the diversified 21st century, it's almost hard to imagine how overwhelmingly concentrated corporate power was in GM back then.

But it didn't make a sports car. The idea of a car coming from stodgy GM that could compete with Jaguar, MG or Triumph was almost absurd. Still, there was room inside GM for dreams even if there wasn't any room for whimsy. Harley J. Earl, GM's chief designer (formally the head of the Art and Color Section) and the man who invented the "concept car" with the 1938 Buick Y-Job, was in charge of the corporation's ambitious musings. In the fall of 1951, Earl began ruminating about an open sports car that would sell for around the price of a mainstream American sedan: about $2,000. His ideas were rather nebulous, but he handed those notions over to Robert F. McLean, the concept came into focus and a car based upon that emerged. Determined to keep costs down, McLean used off-the-shelf Chevy mechanical components.

The chassis and suspension were for all intents and purposes the 1952 Chevy sedan's, with the drivetrain and passenger compartment shoved rearward to achieve a 53/47 front-to-rear weight distribution over its 102-inch wheelbase. The engine was essentially the same dumpy inline-6 that powered all Chevys but with a higher compression ratio, triple Carter side-draft carbs and a more aggressive cam that hauled its output up to 150 horsepower. Fearful that no Chevy manual three-speed transmission could handle such extreme power (there were no four-speeds in GM's inventory), a two-speed Powerglide automatic was bolted behind the hoary six. And to keep tooling costs in line, the body was made out of fiberglass instead of steel. 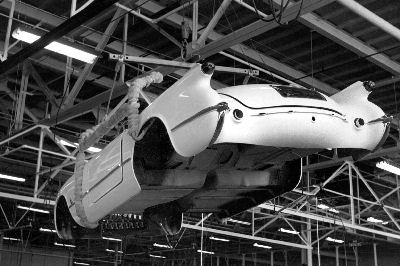 While the car was conceived with rigorous attention to the bottom line and production feasibility in mind, it was still only intended to be part of GM's Motorama exhibit at the 1953 New York Auto Show. That is until Ed Cole, Chevy's recently appointed chief engineer, saw it. Cole, then immersed in development of the world-changing 1955 "small-block" V8, is said to have literally jumped up and down with enthusiasm for the Motorama car. So before it even got to New York, and after some corporate machinations, the engineering to put it into production began.

But first Cole needed to name it. So he called Myron Scott, founder of the All-American Soap Box Derby and an assistant advertising manager for Chevrolet, into a special meeting of executives researching the name. Scott suggested "Corvette," Cole loved it and the rest is history. The public at the New York show loved the 1953 Motorama Corvette almost as much as Cole did. Thousands of potential buyers wanted to know when they could buy one. Just six months later, they could. The 1953 Corvette, virtually identical to the Motorama prototype, entered production on June 30, 1953, in Flint, Michigan. GM has been making them ever since.